Everyone had to start from the beginning at one time or another, even the world championship poker players that we may or may not have grown to admire over the years. Poker is easy to learn and difficult to master. Much like golf; it’s fairly easy to understand the basics but the subtleties and nuances will have you dashing down your clubs onto a felt-like green surface in frustration 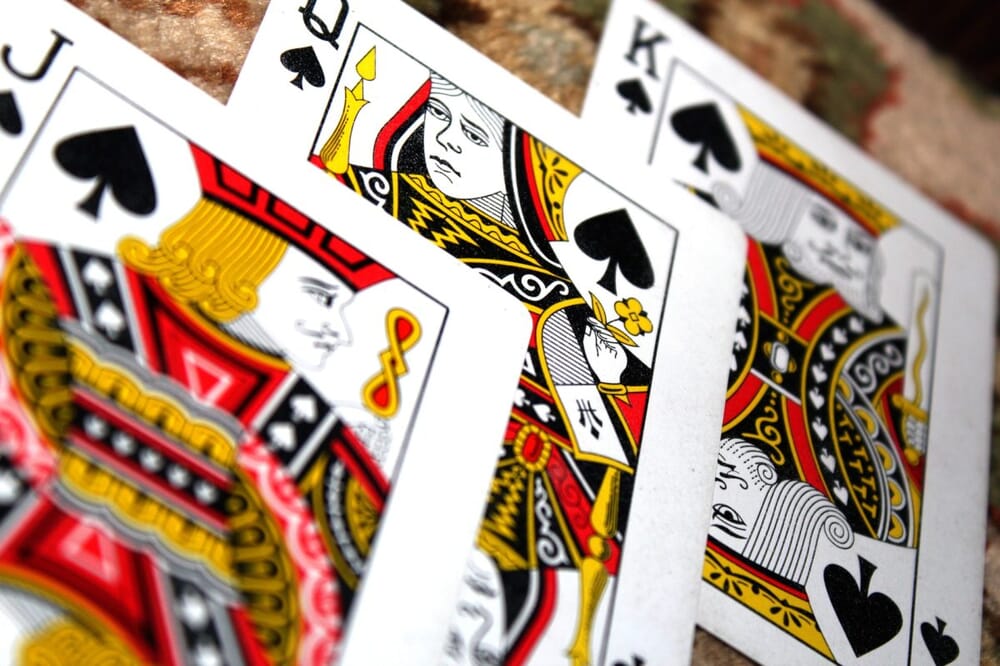 Of the myriad of games available for our enjoyment “Five Card Draw” provides us with the opportunity to learn the basics on which all other poker games are based.

Let’s start from the beginning, shall we?

Players Two to eight or more. Certain forms of poker can be played by up to 14 people. No alliances are allowed; a player may play only for himself

Basic terms The usage of some poker terms is not standard. In the following text a “hand” means the cards, or the particular combination of cards held by the player. A single game, from one shuffle to then next, is here called a “play” (rather than a “hand”)

Objective Each player tries to maximise his winnings. On each play all bets are put into a common pool (the “pot”). One player wins the pool on a play if:

Rank of cards Cards rank in the normal order. Ace usually ranks high, except in the 5,4,3,2 ace sequence; in a “high-low” game it may rank either high or low. Sometimes low ranking cards (2s, 3s and even 4s and 5s) are removed from the deck to speed up the game. The suits are not ranked.

Hands of the same rank When poker hands are of the same rank, the winning hand is decided by the rank of the cards involved. The following rules apply where no wild cards are used

Hands tie Hands tie if they contain exactly the same denominations; the suits are irrelevant. Hands that tie as highest in the showdown divide the pool between them. If the pool is not exactly divisible, the amount left over goes to the player who was “called” (i.e. the player who made the highest bet)

Wild cards Sometimes at the beginning of a game the players decide to designate certain cards “wild”. A wild card is one that may represent any denomination. Any card or any group of cards may be designated, but the following are popular choices:

In some forms of the game, a card that occupies a particular position in the game may count as wild, for example each players “hole” (concealed) card in some stud poker games. Two alternative rules govern the use of a wild card. The holder may either:

In either case, a wild card ranks the same as the card it represents. If a joker is used as a wild card, it may be used either like any other wild card or, alternatively as a “bug”. The bug may be used to represent only an ace or any card the player needs to complete a straight or a flush. Again, the use of the joker as the bug may or may not be limited to cards not held by the players.

Sometimes a wild card my be used only to make a five of a kind- but not to make double ace high flush. This must be decided before start of play.

Bluffing Bluffing is allowed (i.e. trying to mislead other players by statement, actions or manner). Bluffing may include making announcements out of turn about one’s hand or plan of playing so as to make one’s hand seem weaker than it is. Sarcasm, heckling and derision are allowed – help is not!

Betting intervals In a single play there will be at least one betting interval, and normally two or more. These always follow receipt of cards by player but the precise number and when they occur depend on the form of poker being played. In each betting interval, a certain player will have the right to bet or not to bet first. (How he is chosen depends on the form of the game). Thereafter players bet or do not bet in a clockwise rotation.

Principles of betting All bets on a play are placed together near the centre of the table to form a pool. One player bets first (“opens the betting”). Thereafter, each player in turn must either “drop out”, “stay in” or “raise”.In his turn, a player announces what he is doing prior to placing any chips in the pool. For a first bet or a raise, he also announces the amount of the bet or the raise. A bet is not considered made until the bettor has removed his hand from the chips bet: until then it can be withdrawn.

Checking Checking is allowed in many games of poker. A player who checks at the beginning of a betting interval stays in the game for the moment without making a bet. If all payers check, the betting interval ends. But if one player bets, the interval continues as usual: all other players (including those who have checked) must now stay in, drop out or raise. To stay in, a player who has checked must equal the highest bet made so far. If all players check on the first betting interval, the play is void and ends. The next player in turn deals the round

Passing Passing may mean either:

Raising to force out other players is an essential part of poker, but beyond a certain point it can spoil the game’s character. Two optional rulings can keep it in check: limiting raises, and freezing raises.

Freezing the raise Freezing the raise is becoming accepted procedure. If there have been two or more raises (whether by one or several players), in a single betting interval, any player who has not raised in that betting interval may “freeze the raise”. In addition to betting sufficient to stay in, he bets a previously agreed amount, usually two to five times the normal maximum bet. Other active players must then drop out or stay in by equalling his bet. This action only freezes the raise for this betting interval.

Side bets Side bets are sometimes made between players. For example, in a “high card bet” in stud poker, players bet on who will have the highest first upcard.

Betting prohibitions A player may not:

Betting limits The system to be used must be decided upon before play. The betting limits are also the raise limits. Note that a player forced to bet, for example, the maximum amount to stay in, may still in that turn raise by the maximum (an by any lesser amount).

Specified limits Fixed minimum and maximum amounts are specified before play starts. Sometimes it is agreed that either

Specified limits, varying The minimum and maximum limits change during play ; for example limits for the final betting are always twice the earlier limits.

Last bet limit The opening bet is agreed by agreed limits. Thereafter, the maximum bet or raise is the amount put in the pool by the previous bettor’s actions. Players must decide that either:

Pot limit The opening bet is governed by agreed limits. Thereafter, the maximum bet or raise is the total amount in the pool at that time. To calculate this, a player wishing to raise may include in the pool total the sum needed for him to stay in. Agreement on an absolute maximum is still necessary.

Table stakes Before the session, each player puts any amount of money he wishes onto the table, or buys chips to that amount. ( A minimum is agreed beforehand, and sometimes a maximum too.) Any amount a player wins is added to his table amount. He may also from his own pocket, increase the table amount – but not during a play, and only by at least the agreed minimum. During a play a player may not:

The maximum betting limit for a player is his table amount at the time (the minimum is the amount agreed beforehand). If a players table amount is used up in a play, he has the right to remain in for the main pool showdown. Any amounts bet by other players, above the amount he has bet, are put into a side pool.

No limit A player can bet or raise any amount. He may borrow during a play, if he can, but he may not put IOUs in the pool. To stay in, he must equal the highest bet. IN the old no limit games a player had 24 hours to raise the money for a bet. No limit games have no virtually disappeared.

Freeze out This can be played with any limits system except table stakes. Before the session, each player puts an equal number of chips on the table in front of him. Winnings are added to this amount, but no players may add new chips, lend chips or remove chips from the game. As soon as a player has lost all his chips, he drops out. The session continues until one player has won all the chips.

Jackpot This ruling can be played with any limits system. It applies if all other players drop out in a play, after one player has opened the betting. In the next play and before the deal the other must each “ante”(put) into the pool an amount equal to the single bet made in the previous play. The new maximum limit (for this play only) is the total amount now in the pool before play starts (providing that this is higher than the normal maximum). The minimum is as usual.